HTC’s vision for its enterprise-focused Vive Focus 3 headset is a world where meetings across the globe are held inside a digital world, according to the company’s ANZ country manager Thomas Dexmier.

However, despite the idea of a virtual world being undoubtedly very cool there are issues, like slightly janky and emotionless avatars, that make it hard to see Dexmier’s promised future clearly.

To get a better picture of what the Focus 3 has to offer, CRN spoke with leaders from two Australian HTC reseller partners. They explained that although we are certainly far from the sci-fi reality of the Hollywood movie Ready Player One, the Focus 3 may actually be a turning point for VR.

Both Brisbane-based Frontier Wear’s Todd Robertson and Perth-based RTV Computers’ Sean Carter said that the Focus 3 is the first VR headset that is truly fit for use in industry and enterprise – though it still needs a little help.

Frontier Wear is a specialist reseller of extended reality (XR) solutions, which started with the RealWear augmented reality (AR) wearable device and has recently extended into VR with the Focus 3.

“We have been waiting for the VR space to evolve to where it is now before we took the dive in,” Robertson explained.

“RealWear is very much centred in the industry; it’s built for an enterprise deployment model. Now the Focus 3 has come along and it’s the first enterprise-ready [VR product] that we feel is the right one.”

In contrast, RTV Computers is an IT procurement specialist that was reselling the Focus 3’s predecessor, the Focus Plus, to industry for some time. Compared to the Plus, Carter described the Focus 3 as “the biggest improvement ever”.

“They’ve pretty much thought of everything. For example, the balance is better, the battery on the back makes a massive difference. It was the smallest little things that all added up to make the focus three that I think definitely make the difference for an end user,” he said.

These are the big selling points of the headset: it is standalone and totally wireless with the CPU and GPU built right into the unit, it has hot-swappable batteries, a 5K display (made up of two 2.5K displays, one for each eye), a snug-fitting and easily removable and sanitisable face gasket, and more easily and minutely adjustable straps.

With the Focus 3, which HTC provided CRN as a review unit, all of this added up to a smooth and easy-to-use piece of tech.

However, Robertson and Carter both found that they cannot simply box-drop the units to their clients. The set-up and config, as well as finding the right software for certain use-cases present major barriers – but also, a major opportunity.

Carter said that while RTV is traditionally a hardware reseller, the Focus 3 has seen the company adding value for end users by working with developers of VR applications.

“It’s been really good dealing directly with developers. We’ve been assisting them with customers, then leading them into other customers that have inquiries,” he explained.

“We’re actually in front of the content with this stuff. A lot of the time, we deal with hardware, and then we don’t really get to see the end result, but we’ve been working very closely with content providers with this in collaboration.”

Frontier Wear takes it one step further, spurred by what the company learned in its early days as a RealWear reseller. At first, customers were struggling to make use of the product and so giving up on it entirely.

“We then started to develop pre-kitted cases: ‘what if I can send this pre-configured?’ … ‘What if you could put some little help cards in the box? What if you could deploy our software for us?’ and then all of a sudden, there it is. The magic sauce for HTC is the same. We’ve just nailed it with RealWear to know that that’s exactly what the industry demands.

“They want the user experience and they want it out of the box. Just like the consumer can open their beautiful box and go ‘wow!’ The industry wants that too, but it needs to work straight out of the box, and that is the missing piece.”

Like RTV, Frontier Wear delivers the device configured and with the software loaded. They also put it in a ruggedised box, with spare remotes, face gaskets or batteries, and even a 5G mobile router. 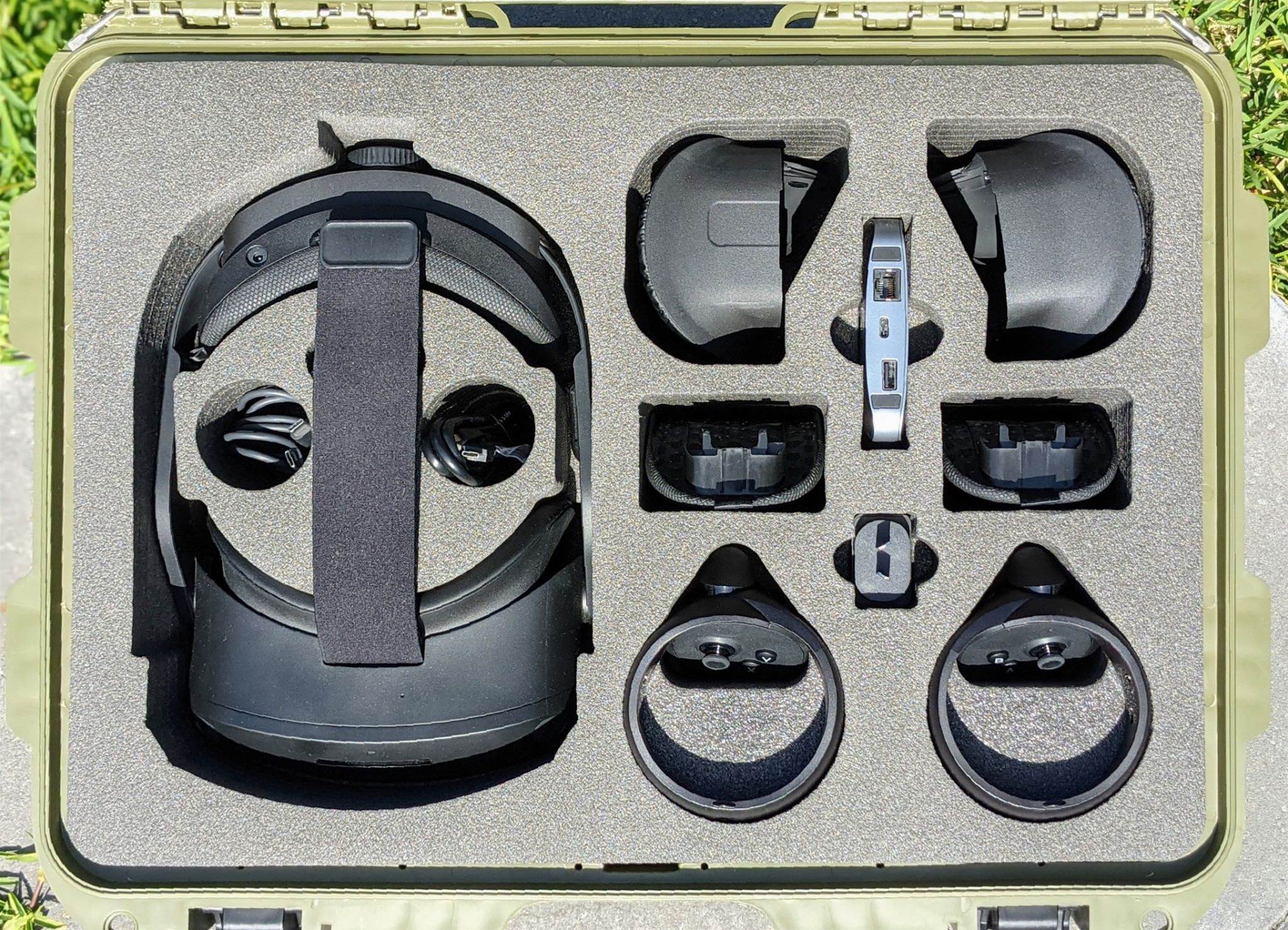 How Frontier Wear provides the Focus 3

With the roadblock of setup out of the way, customers suddenly become much more interested in the tech and creative with what it can offer them, Carter said.

“Once people get their hands on the technology and try it for the first time and they start to see how it can be used, they definitely get that strike of inspiration. We found that dealing with the project managers from the start, it’s really handy because you can show them what other people have done in a public space, and then they go from there – it allows them to apply it to their own end-use cases.”

Immersive video and interactive training remain the biggest use-cases for VR, particularly for hazardous jobs or to prepare for situations where work will have to be done within a limited time frame. However, new use cases are developing at an increasing rate.

Carter said that one customer used VR to help students with learning challenges to better engage with content and found that it improved how well they learned literacy and numeracy skills.

He said artists and performers were increasing interested, and that he had heard of the Focus 3 being used successfully to aid with medical rehabilitation.

Robertson noted that the opportunities for use that the Focus 3 creates may precipitate much faster progression of the tech as “The hardware enables the software, which enables the content, which draws the people to the device”.

While Dexmier’s vision of a world filled with people meeting in virtual space may be beyond reach at the moment, the Focus 3 has helped the tech to step over at least one more barrier to wider adoption.Got a news tip for our journalists? Share it with us anonymously here.